It was last February (year 2010) when I started to blog. I really don't know what to do at first. Because of his kindness, a person taught me what to do. He taught me how can I publish posts, how to insert photos, even on how can I drive more traffic to my blog. What was this all about? I was blogging for almost 1 year and he did his job teaching me the basics.

I am calling your attention because I don't know what to do with my dot info domain. (www.ladymyx.info) It will expire soon and I don't still have money for its renewal.

Voluntary donations are whole heartedly appreciated, even a single dollar can do. Please help the poor me. My ads arent earning yet. I really need your help.

Thank you very much. Please do leave a message after this post.

Ps. If you can't donate, you can click my ads to help. Thanks!

So, we departed by 4 in the afternoon, and arrived there at 6. There's nothing new in there. I have forgot to take some pictures of the place. Haha! The photos below are all I've got. :P And oh! I also forgot it's name (the resort's name, Pansol Hot Spring I guess). Haha! I didn't mean it. I just recalled it was beside Villa Navarro Hotspring Resort.

The pool isn't compose of tiles, volcanic rocks instead. That made the water in the pool hot. There were fishes too. But you can't feed them. All you can do is to stay in your place and let them bite your feet and thigh. Haha! Yah! The admin told us that fishes are going to eat our dead cells. And I've tried it.

They tickled me a lot. I like that feeling. Us soaked in the hot water, enjoying the night. The girl beside me is my younger sister. Who's prettier?

Whew! My sister and me. (Sorry for the quality of this pic. My sister used her Samsung phone.)

Here's that Korean Rice Cracker and Japanese Rice Crackers (I guess it's Japanese, am I right?) They are the same in texture, but ofcourse, different in taste. Korean's sweet.

So, that's for now people. Have a great day! I miss my room. 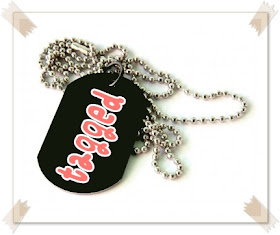 Just some random questions I got from SUSAN and MIHO and LOLLI. And I guess I really need to answer this. By the way, I have to thank Susan for tagging me, cause I'm really running out of ideas to write in here. LOLjk!

1. Why did you create this blog?

Well, I just want an online diary, I have A LOT of blogs btw. :P

I follow blogs with different genres. But more on "informative blogs" such as food, machinery, lifestyle, entertainment, science/tech, and business blog.

I don't wear make-up most of the time but I have some here. Ever Bilena ^.^

Ahhhhmmm, just Guess, Donna Karan, Mango, Lee, Oxygen and others. I don't care about the brand actually. I just (L) those which fits me well.

Those which irritates my skin. (I remembered the time I had the facial, the lady put a lot of chemicals on my face, and then, my face started to have spots and dots, I don't know how to call it.)

BLACK! And skyblue, and violet I guess. (I'm not a girly girl.)

9. What country would you like to visit and why?

KOREA!!!! O.O I just wanna go there, cause Koreans loves to EAT! And they have a lot of foods there. :D

10. Make the last question yourself and answer:
Who's your favorite foreign artist?

Fashion and music have always been regarded as twin vanguards of self expression. And I have been influenced by them when I started to fall in love. Joke! Music keeps our life going.

Other says music is life. It is somehow true for life without music was really boring.

I love music but it really depends on what genre will I listen to. Its like a relationship.

There has to be a certain level of commitment. But sometimes this thread got to be pulled off. Emotions tell you what kind of song will you listen to. When youre gay, there were love songs, when youre upset, there were sad songs. But one more thing about music that passionate me a lot was it can tell how people feel. I know how to play piano,

just the simple do re mi. I can play the guitar too. 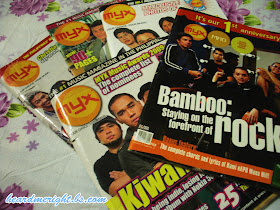 ) magazines and they are awesome. Its a music magazine here in the Philippines. One reader said that this mag was really cool, it keep readers updated on music industry especially the local music scene. Ofcourse not just the local, it contains international music news too. I have bought an issue with Super Junior and Wondergirls trivia.

That was the 19th issue I guess. Hindi talaga sya nakakasawang basahin. Very informative about our favorite local and int. Artists. How about you? Do you have music magazines too? 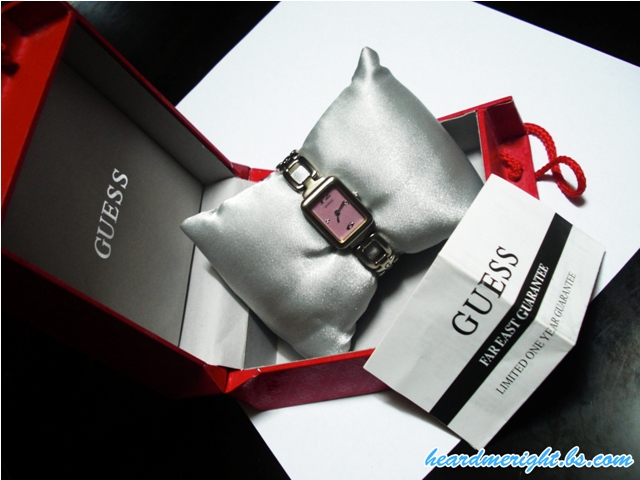 Last night, my brother bought some ingredients for sushi. But what we made isn't sushi. Haha! I'm insane. We made the Korean version of sushi. (Am I right about that?) Kimbap or 김밥 is a steamed white rice (bap) and various other ingredients, rolled in gim (sheets of dried seaweed) and served warm in bite-size slices. [source] Yeah, cause sushi is a roll with raw fish, we definitely don't eat raw fishes.

Haven’t tried this brand of Nori Sheets yet. But it’s cheaper than the other one we use to buy before. 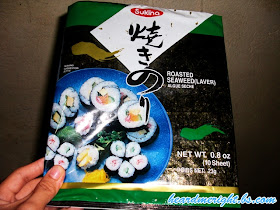 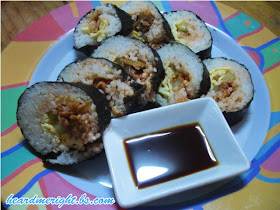 Oh by the way, another Korean Noodle in here. Pretty hot! 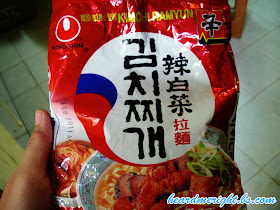 I'm very fond of eating and suppose I must be as stout as my younger sister but I'm not. Hahaha! So, I am very thankful about it. I always wanna try different kinds of foods. But for now (I don't have any coins in here), I have tried this fried noodles and fried ice cream for my lunch yesterday.

That thingy is clean, I guess. It just look so messy and dirty because of the first batches of noodles which were cooked in it.

First, the lady placed some noodles and bean sprouts in that metal thing, and later, she put some secret sauce. I guess it was just "oyster sauce". Haha! In a minute, all are set and done. 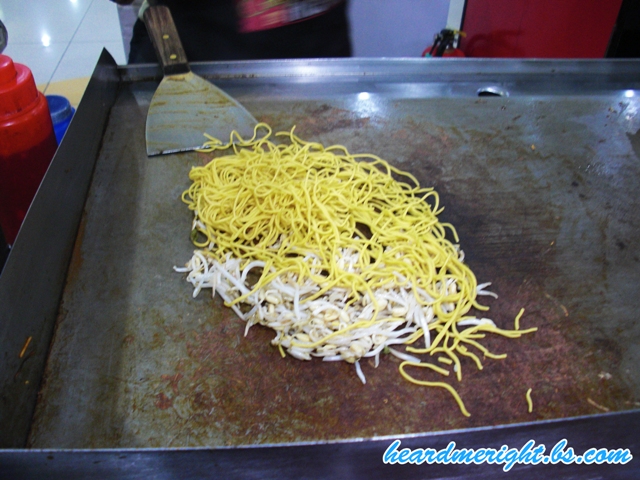 They have six different sauces, just put some of it in your noodles. I like Sweet and Spicy but I have chosen that KOREAN mix.

That's how I love Korean foods! 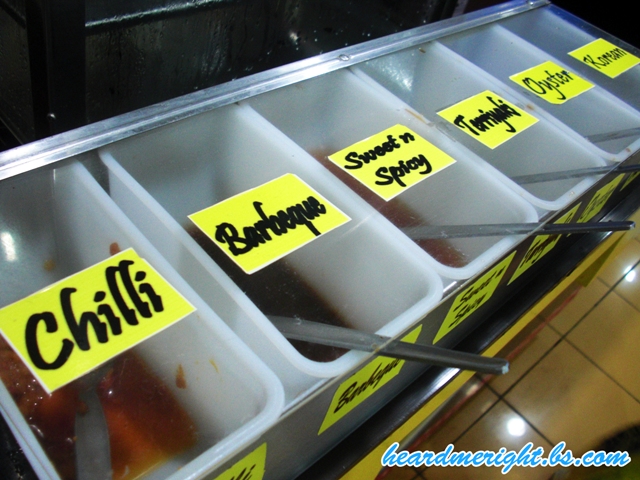 Here's how simple mixing was. 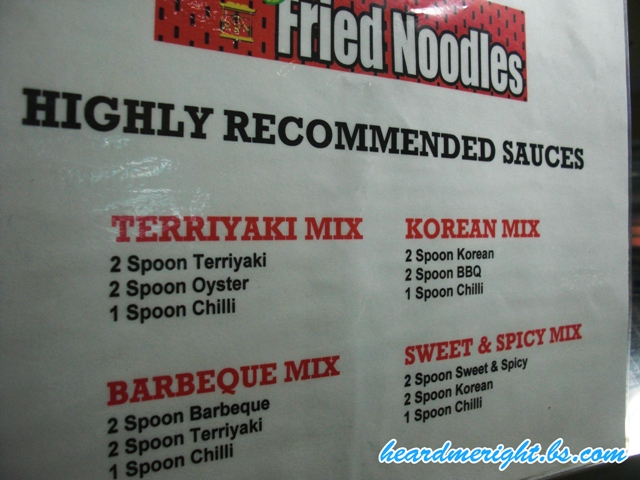 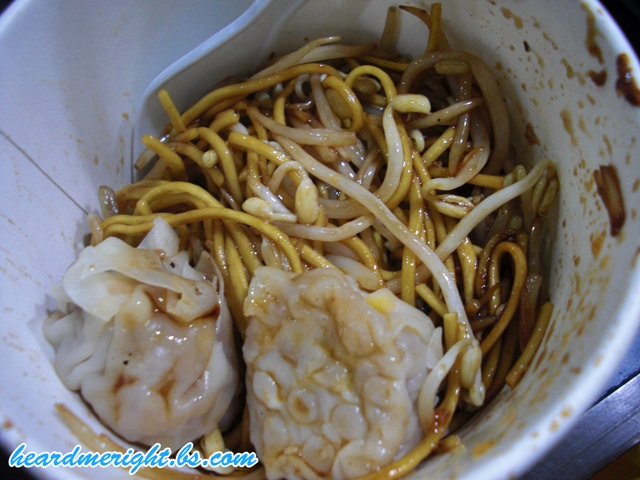 It was served with siomai or Chinese dumpling and a glass of Black Gulaman. 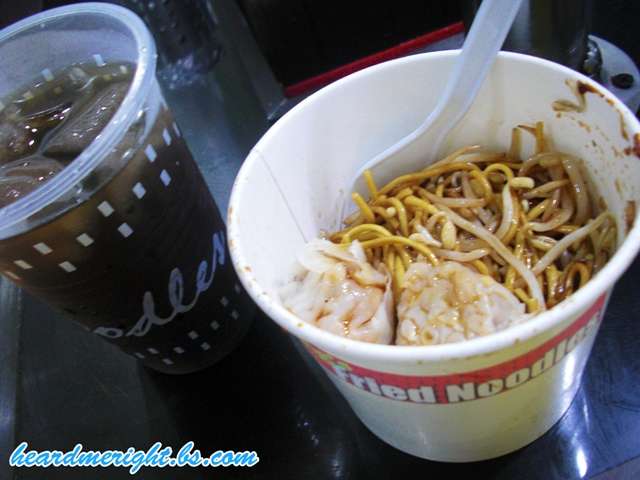 And for my lunch dessert, I have here Fried Ice cream. I asked the vendor how come it was called Fried Ice cream if they didn't use oil and didn't fry it at all. The vendor just smiled at me and ask for my address. Well, I'm not interested to talk to him though. I just wanna know why it was called that way. But I got no answer.

I just enjoyed what I have. 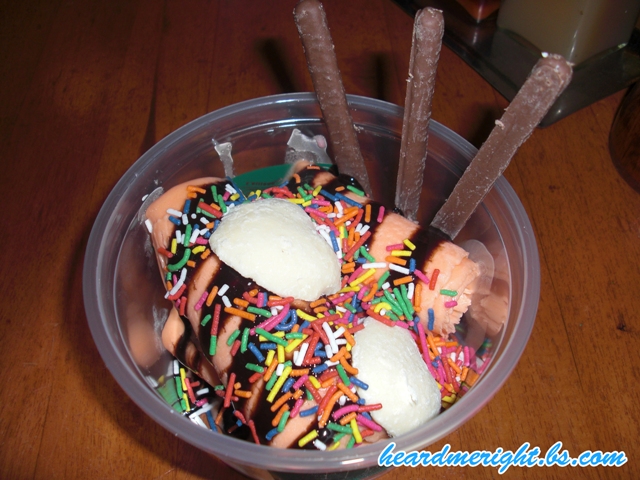 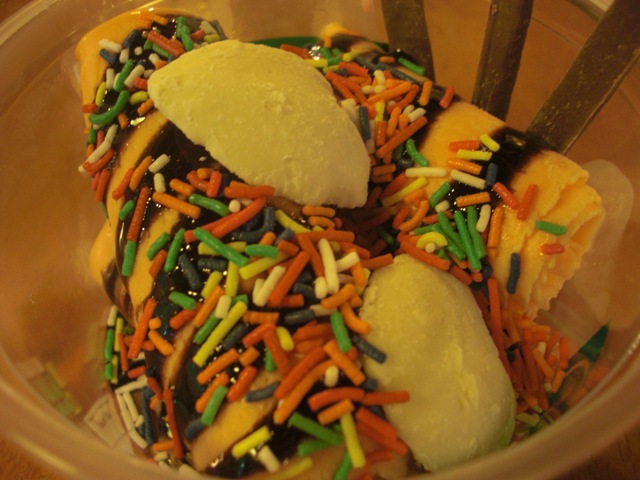 That was so......hmmmmmmmmm! I'll buy again if I'll pass in that mall again.

Haha! Last night when we talked, my brother promised to take us to that Korean Restaurant found in Makati, so we can try that controversial fish cake/ 오뎅. He told us that was indescribably delicious.

I'm really excited about it. So, bye for now.